Admin Sedy
posted on Saturday, February 22 2020, 06:13 AM in Updates
The game has been updated with changes and additions. Please run your launcher for the updates before trying to login.

Don't miss the Facebook event for a chance of winning a Moolah Mantle and Schematic. You can enter here.

VALENTINES
Valentines has come late to Arcana this year. Speak to Alfredo in Terminus for quests and his Valentines store.

Help Alfredo stock his shop with Jewelry Boxes, Heart Shaped Pendants and Chocolate Gift Boxes by collecting materials and ingredients from monsters around Arcana and he will reward you with Love Tokens that you can spend in his store.

You can also buy the fancy Be My Valentine? mantle if you collect enough tokens! 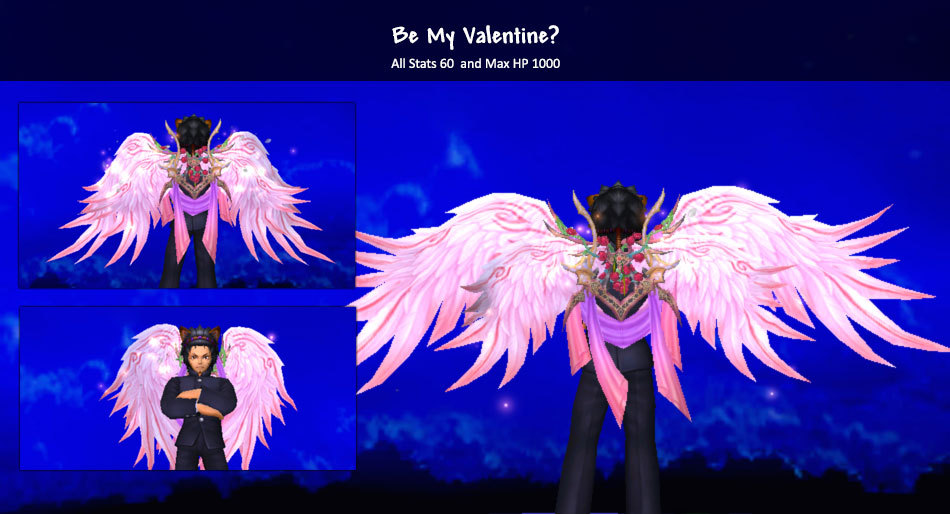 Valentines related costumes, accessories, mantle schematics and mount can all be found on the Shopping Mall with a 10% discount.

BRAND NEW DUNGEON: GARDEN OF BAPHOMET
A new dimensional crack has been discovered that leads to the Garden of Baphomet! 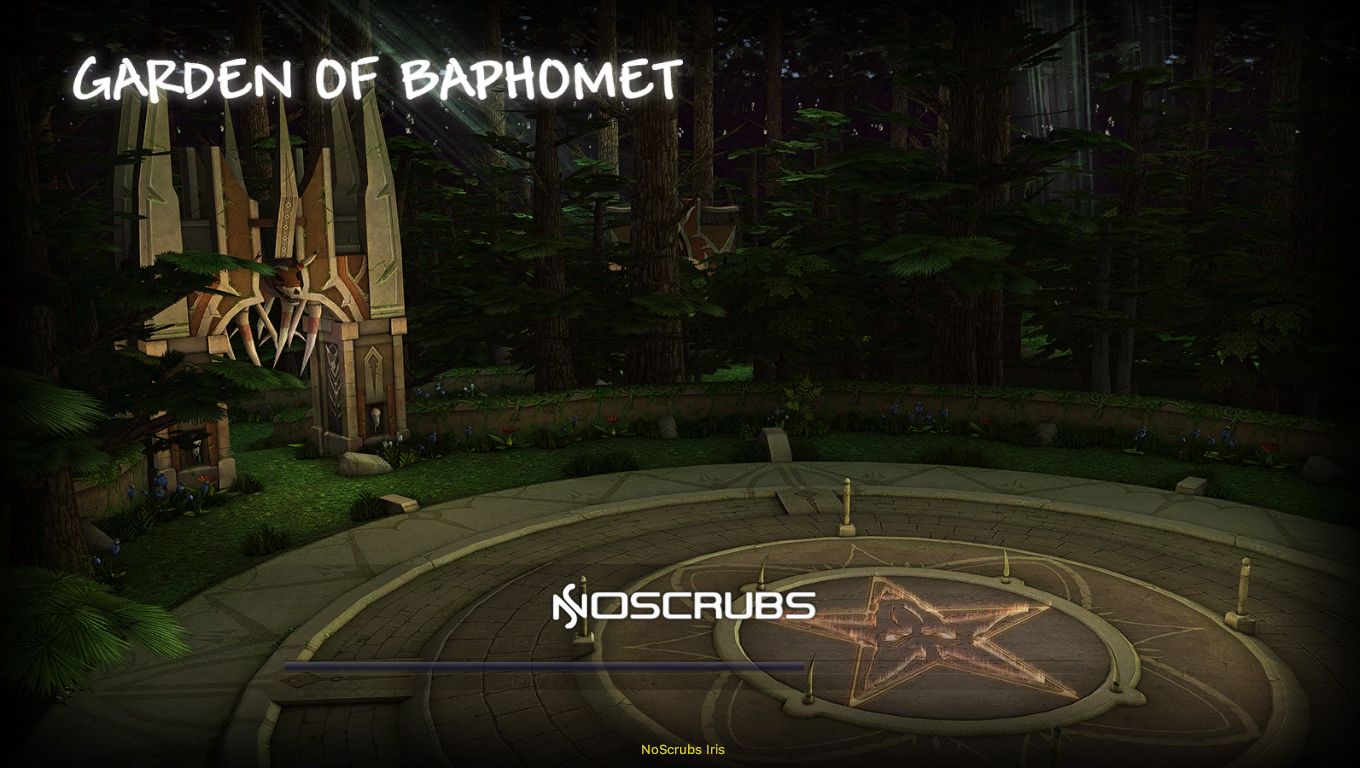 The Garden of Baphomet is a dungeon for 1-6 level 65+ players and can be entered upto 3 times per day.
The dungeon difficulty scales on the player's level and how many players are in the party. It has been designed to allow solo play, with monster difficulty scaling up if players join together. 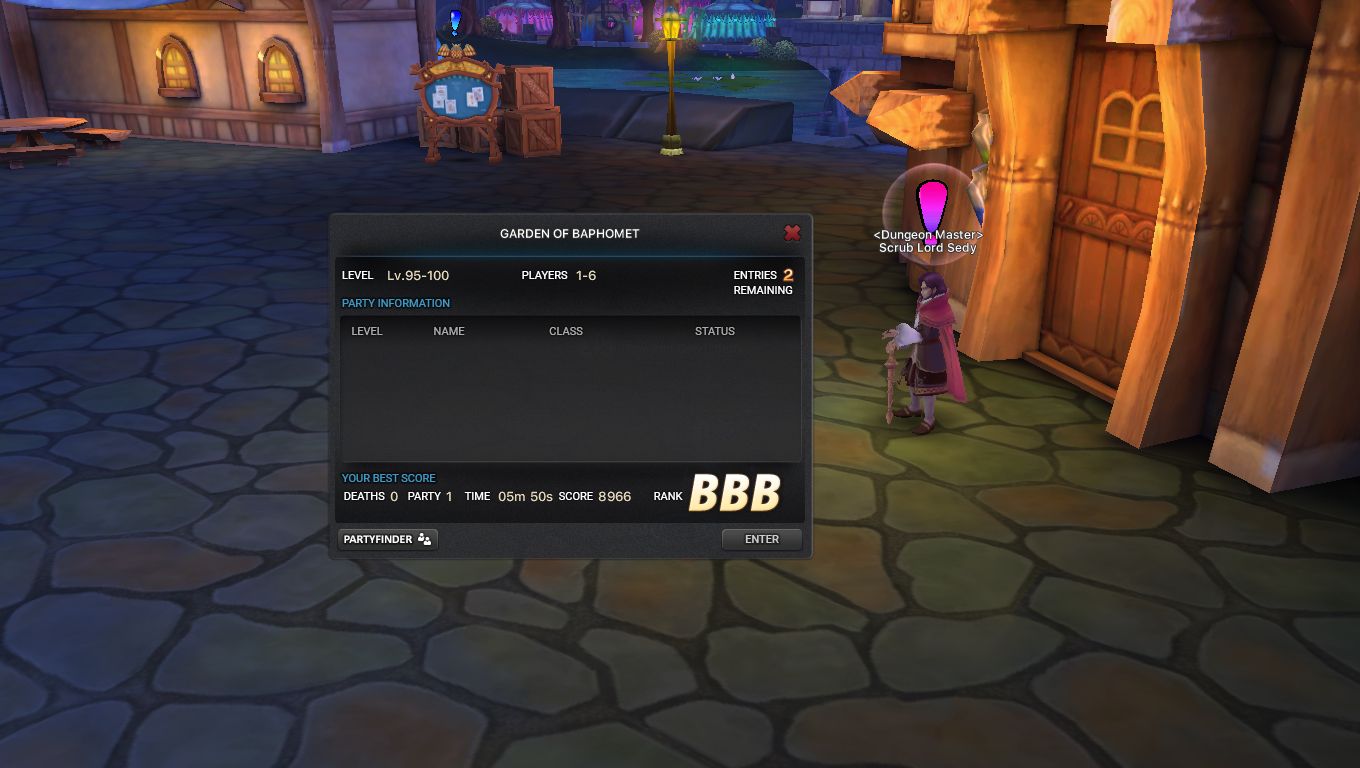 The dungeon uses a new system that is a mix of Vortex style missions and a normal dungeon. Players receive missions that must be completed before moving to the next area of the dungeon, or missions that require you to defeat a monster without dieing, or within a fixed amount of time to be rewarded with a buff, or a reduction to the timer.

As well as the timer and mission information, on the right of the screen you can see the player with the best time.

The dungeon is timed and the final time is used to give you a rank (C, B, A, S etc.), which is used to determine how good your reward is. At the end of the dungeon, should you succeed in defeating the final boss, you will be able to select a reward based on your final score. The rewards are Rare/Unique/Epic accessories aimed at newer/leveling players, but they do have a chance to extract Fire/Water/Wind/Earth Spirit Pieces.

Monsters in this dungeon use a new aggroing system. Instead of the usual "family style" of grouped aggro, monsters will aggro ANY other nearby monster when you attack them, or when they see you and aggro you, or if they run away and go near to another monster.

Rewards
As well as being able to select a reward at the end of the dungeon, the boss is dropping Epic armor sets. For level 65-74 players, he is dropping the level 70 armor that was on the Trophy Vendor, Runemage etc. These sets have also been upgraded for the level 75 (level 80 armor), 85 (level 90 armor) and 95 (level 100 armor) modes. The sets are more suitable for newer, leveling players, but there might be a few parts of the level 100 sets that could be useful for older players too. 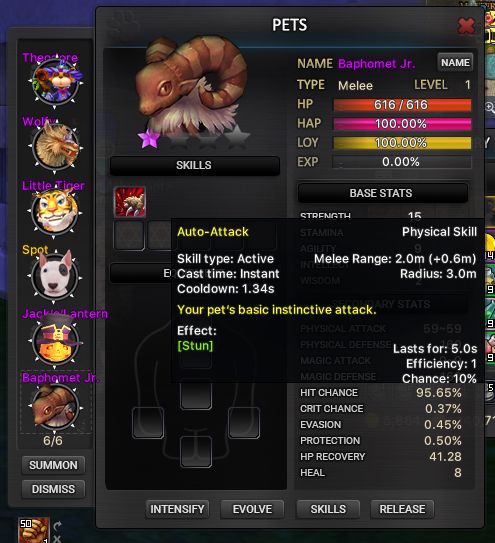 Baphomet Jr. is a Melee type pet with a 5s stun on his auto attack.

Other monsters are dropping various items including Water/Wind/Earth/Fire Spirit Pieces.

Difficulty
The monster difficulty has been tuned based on solo play with average gear and their HP, Defense and Attack Power will scale by set amounts for every extra player in the party. I have tested as much as I can with my limited time after coding all of this, but I am relying on you, the players, to inform me if it needs adjusting. The boss might be a bit too tanky at some levels and party counts, or the damage might be too high or too low etc. So let me know your thoughts on it after playing for a while so I can get it retuned, but don't expect to go in solo with low level gear and no thought to enhancements/cards or it will be slow progress.

Quests
Speak to Scrub Lord Sedy in Terminus for an introductory quest to the new dungeon and then head over to the Request Board where you will find a new quest to complete the dungeon within 15m, rewarding a Moolah Point.

After completing that quest you will find another to complete within 10m, for more Moolah, then another, and then you will unlock a daily Moolah quest. These quests can be completed in any of the 4 modes, depending on your level.

Thanks Ragnarok 2. You may be dead, but you will live on through us now 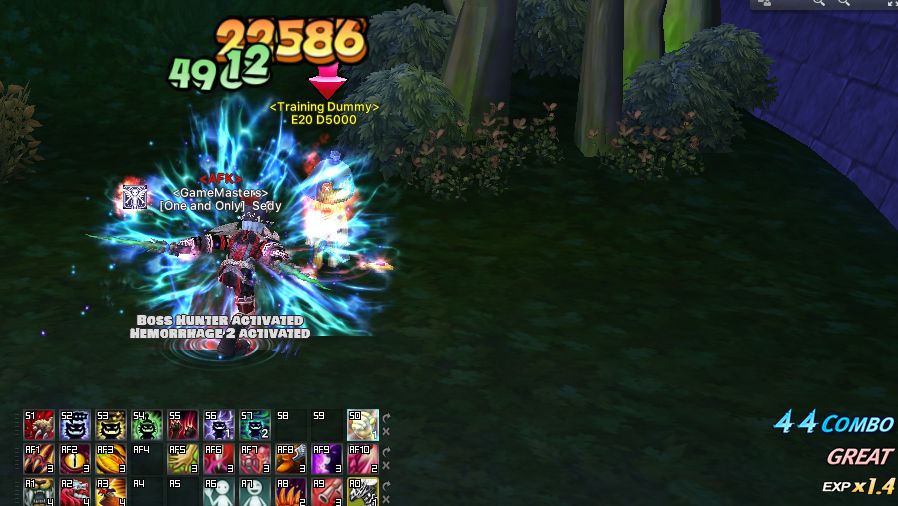 MANTLES
4 brand new Mantle Schematics have been added to the Shopping Mall. 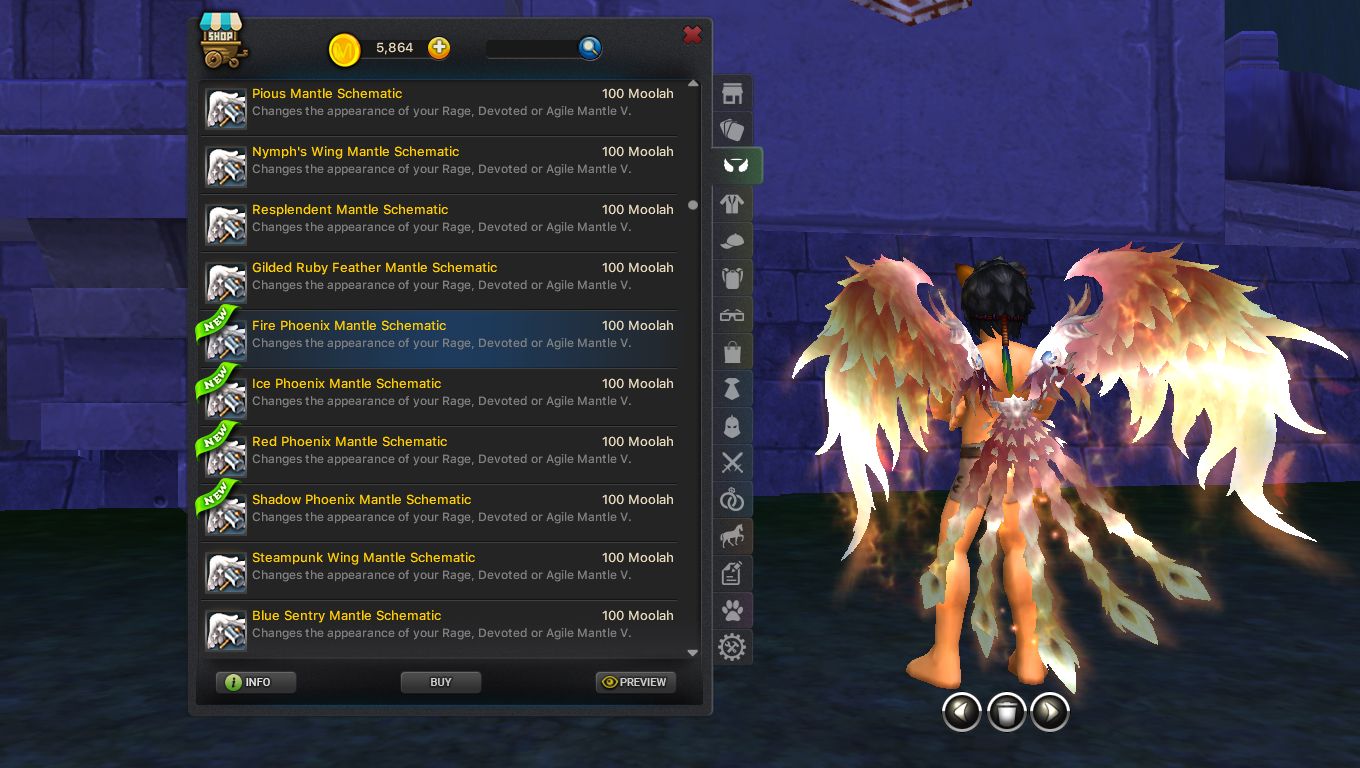 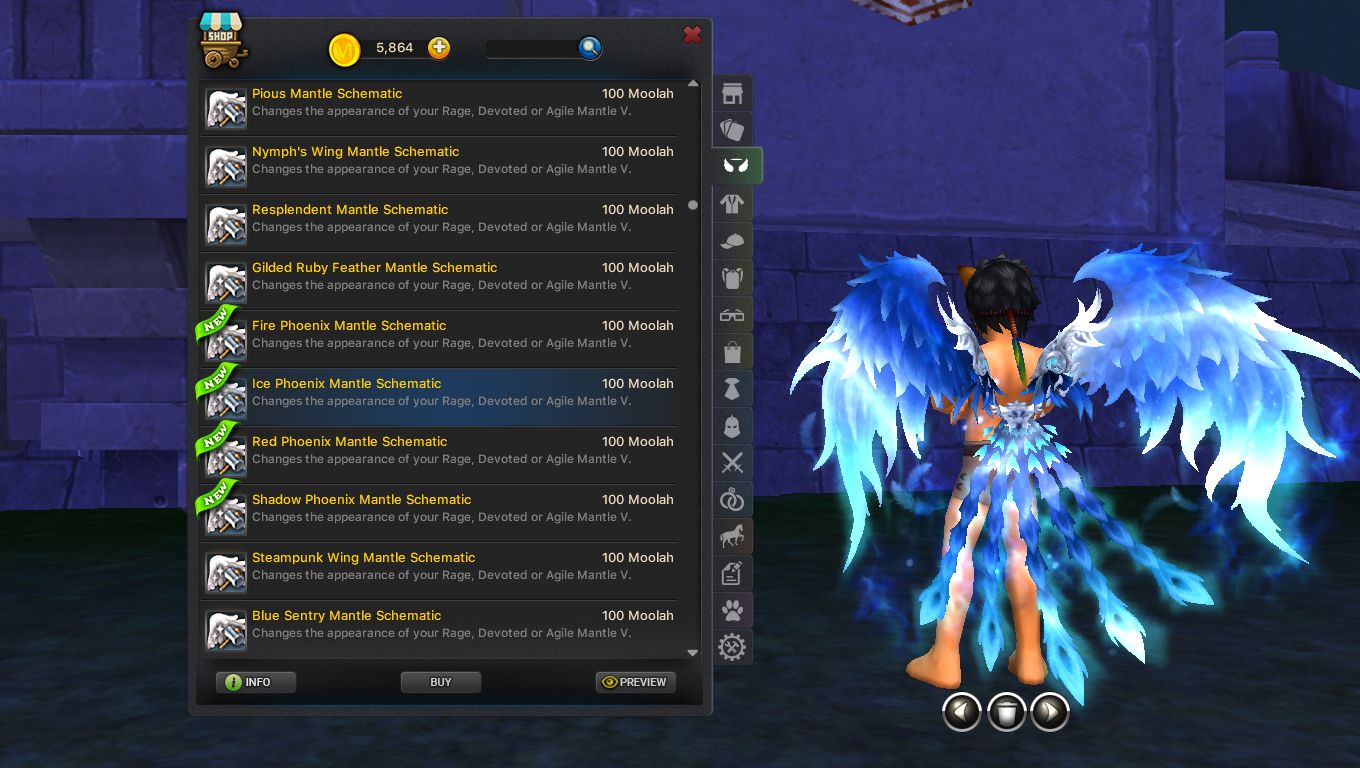 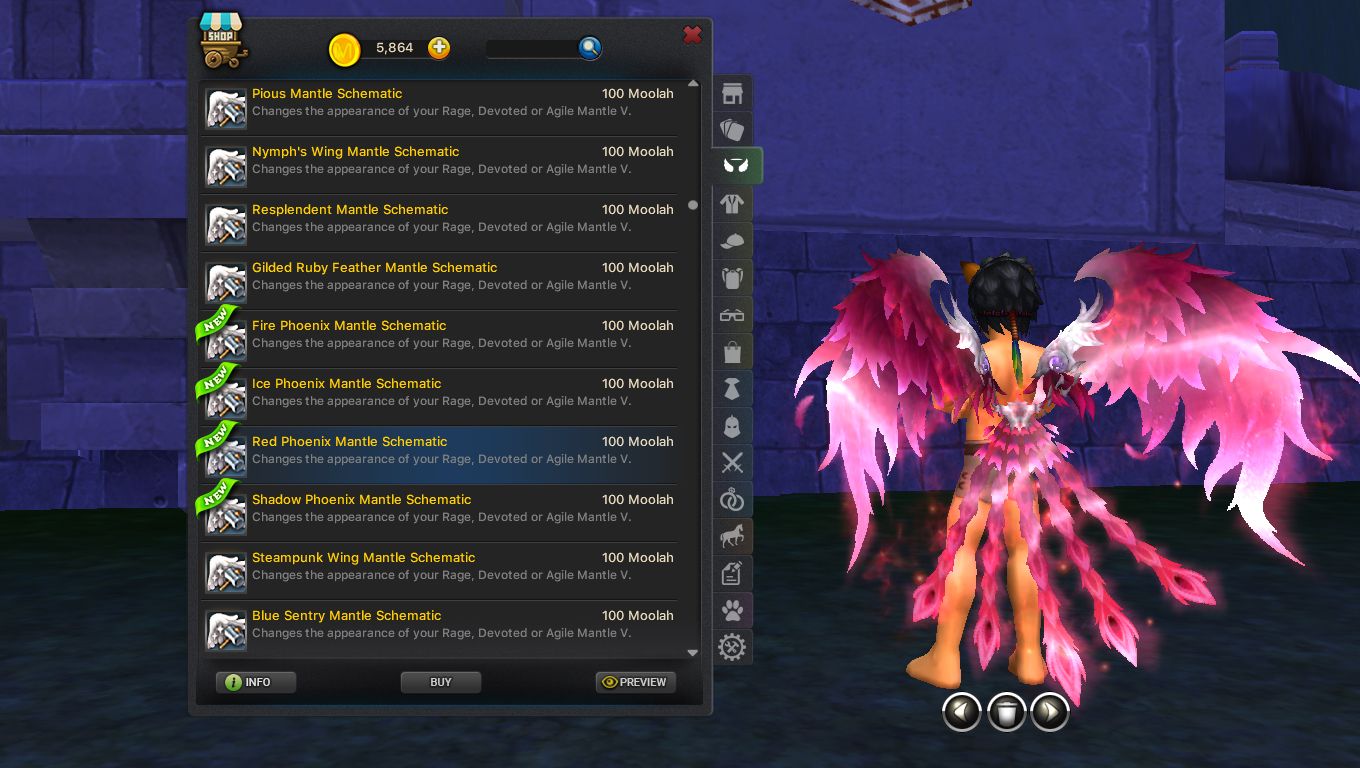 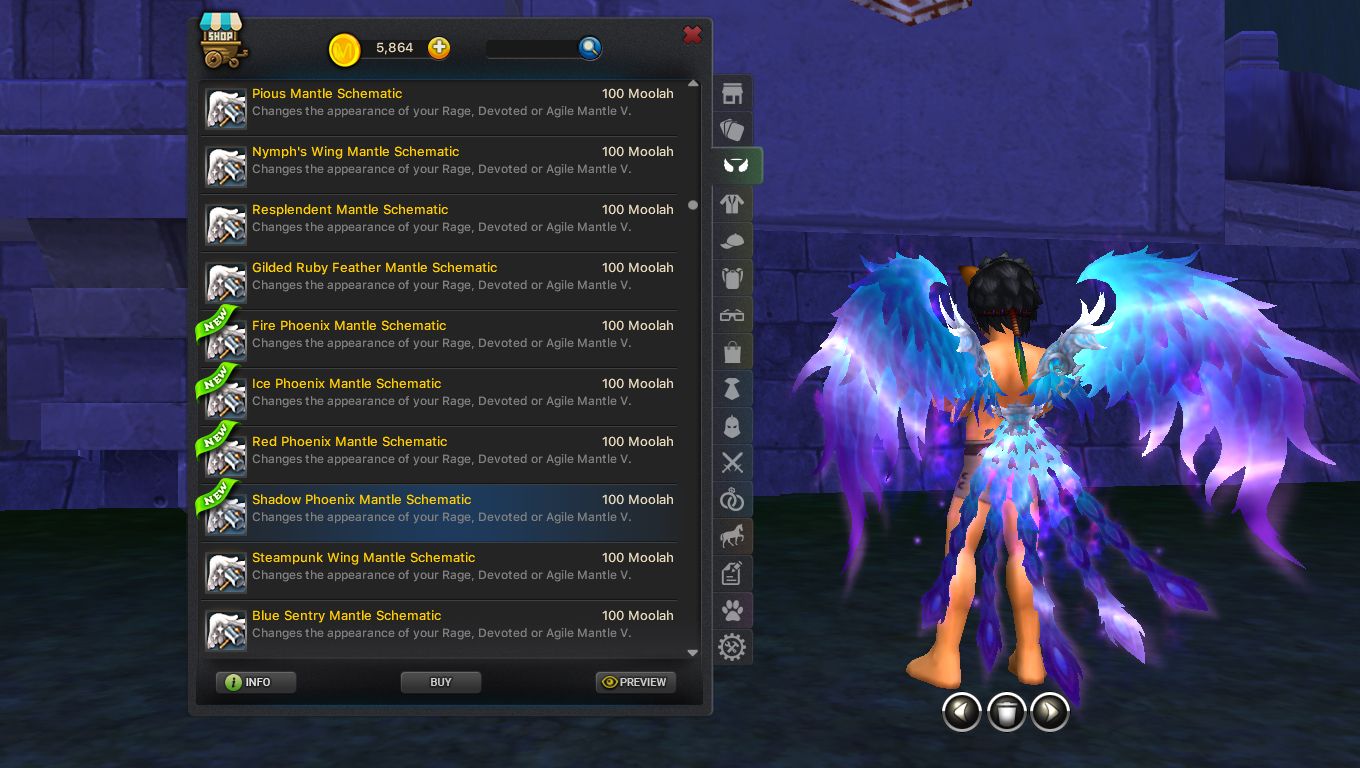 You can also find the Valentines and Anniversary Mantle Schematics on the Shopping Mall with a 10% discount. 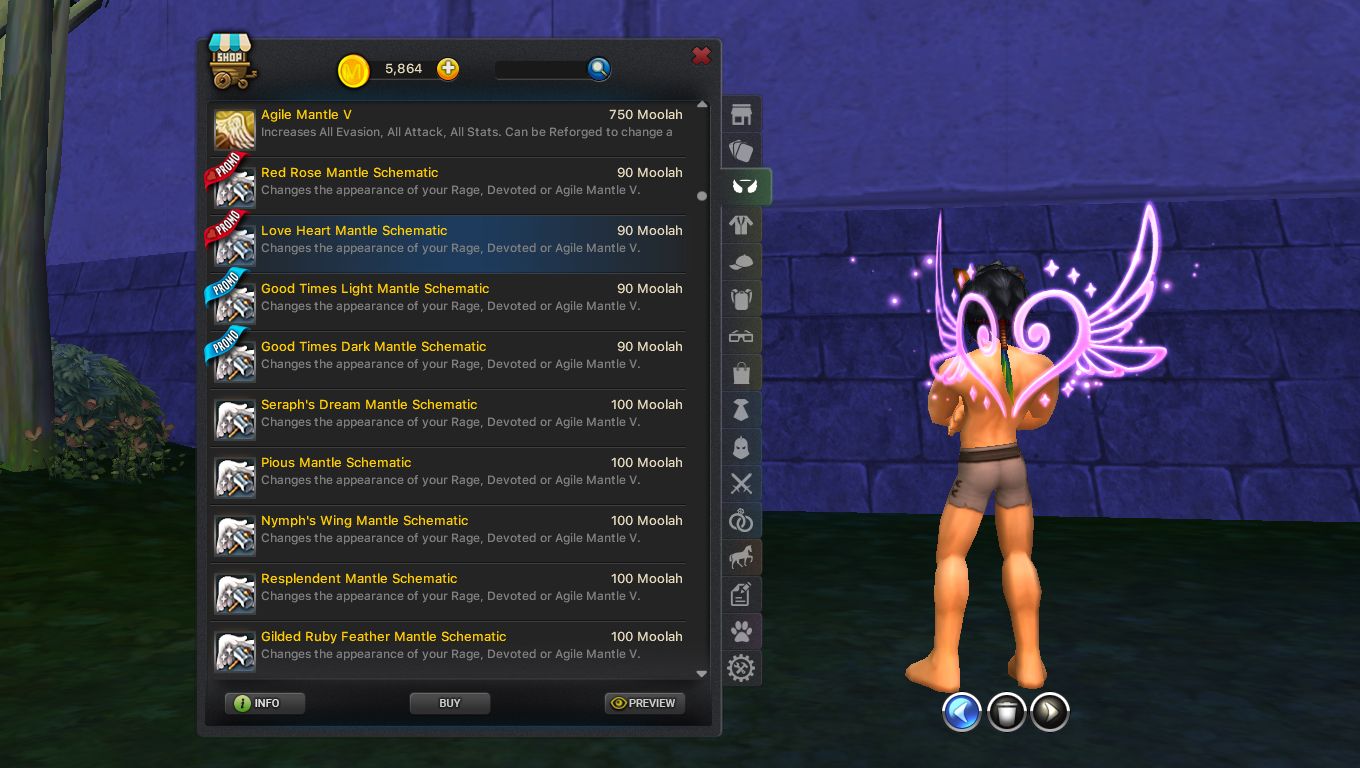 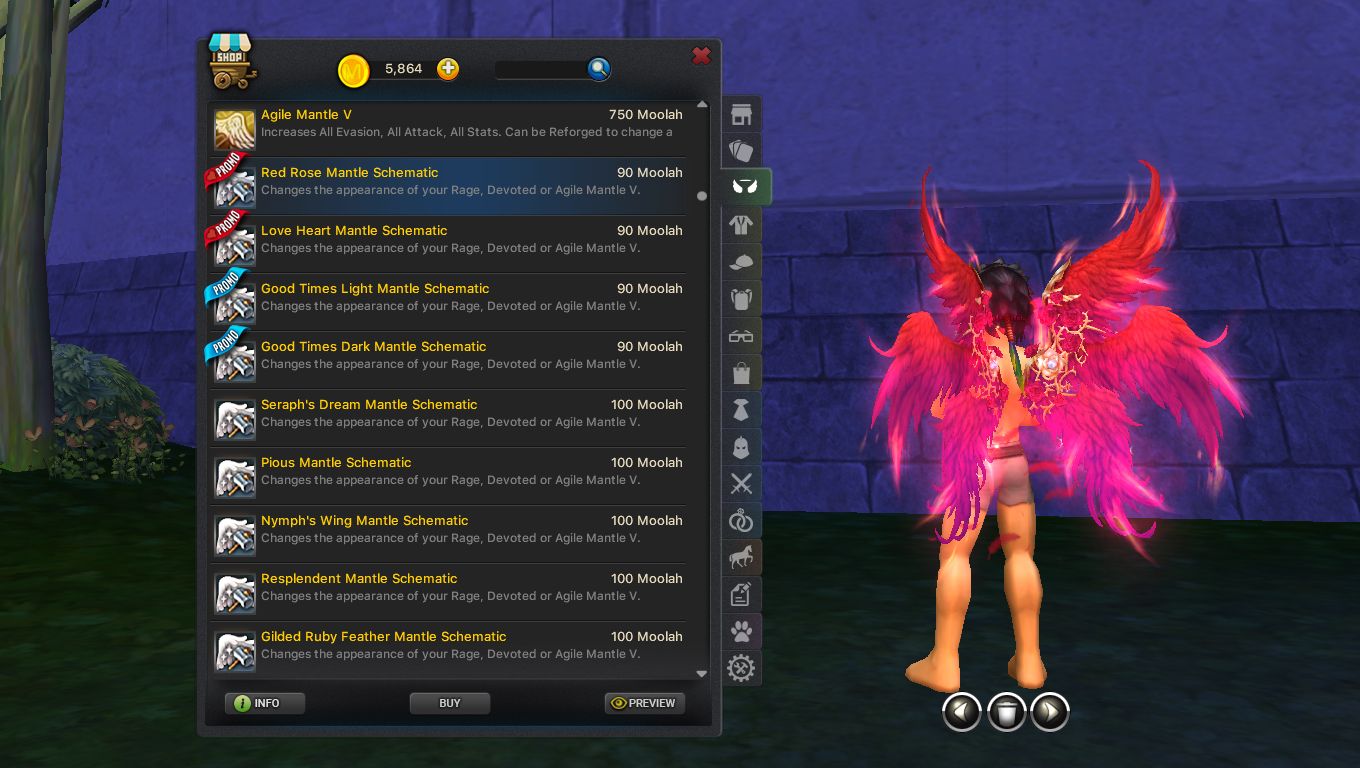 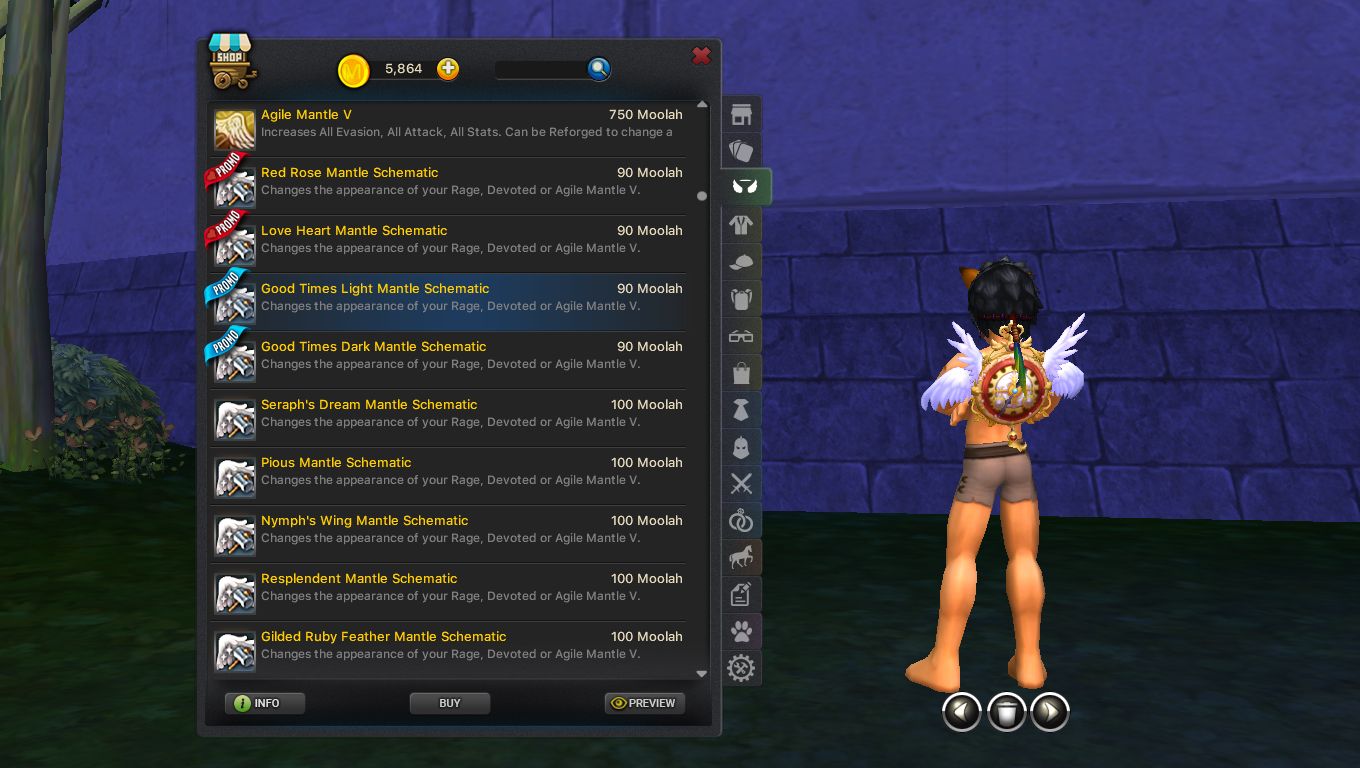 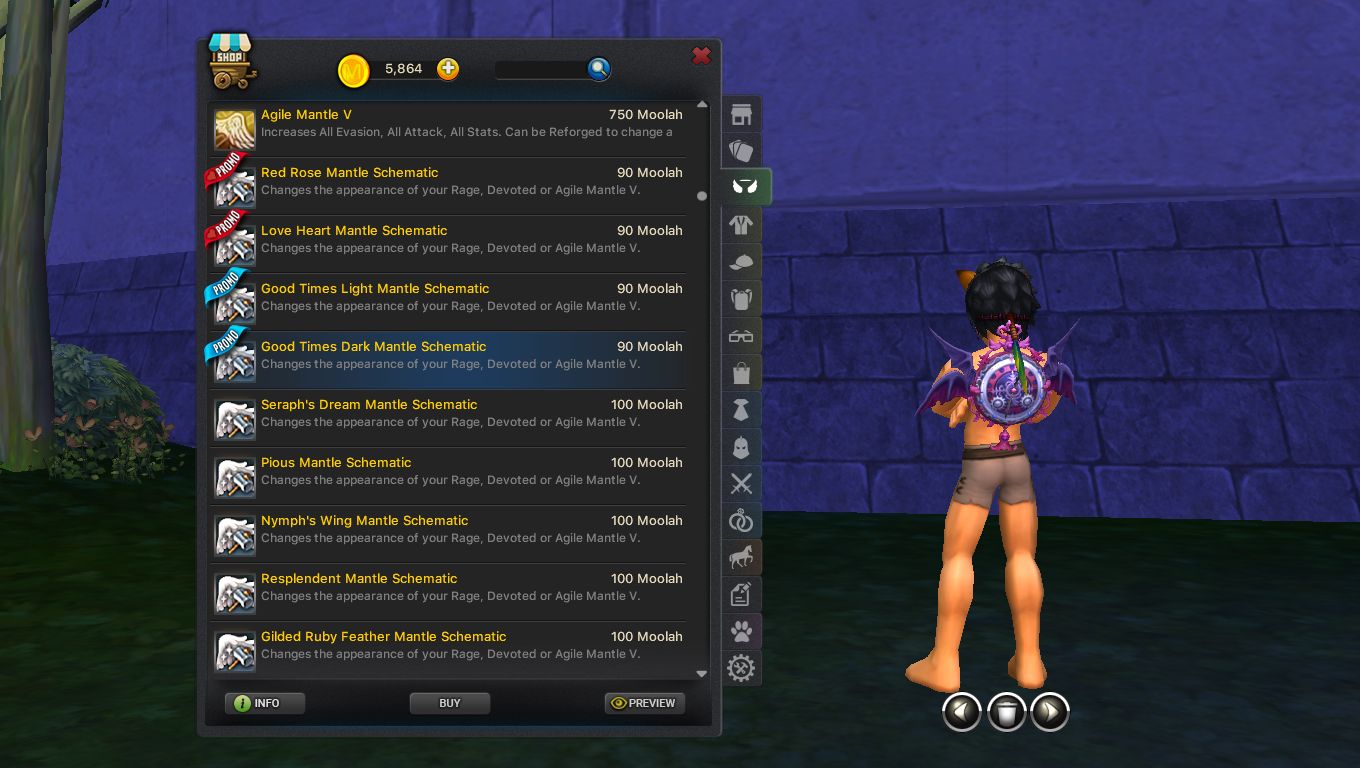 MOUNTS
Brand new mount, Magic Cloud has been added to the Shopping Mall in various colours. 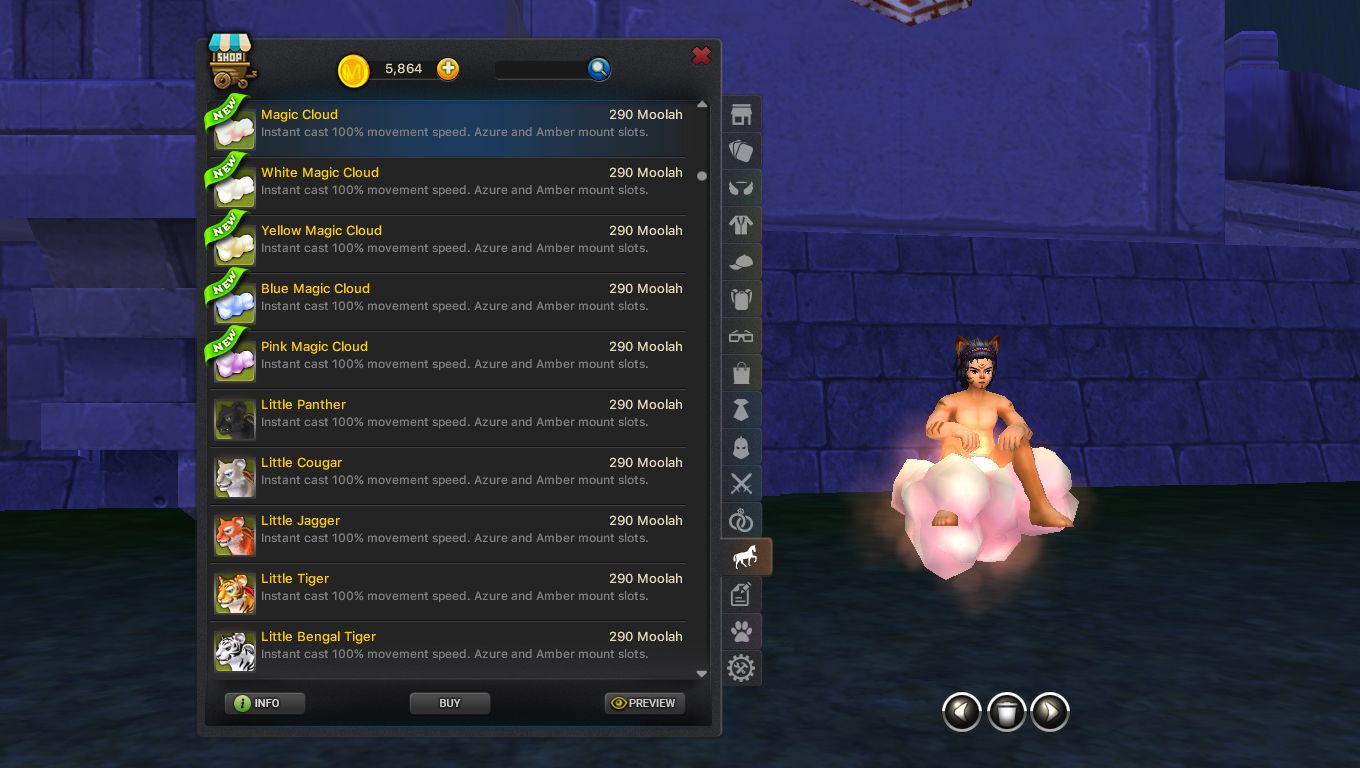 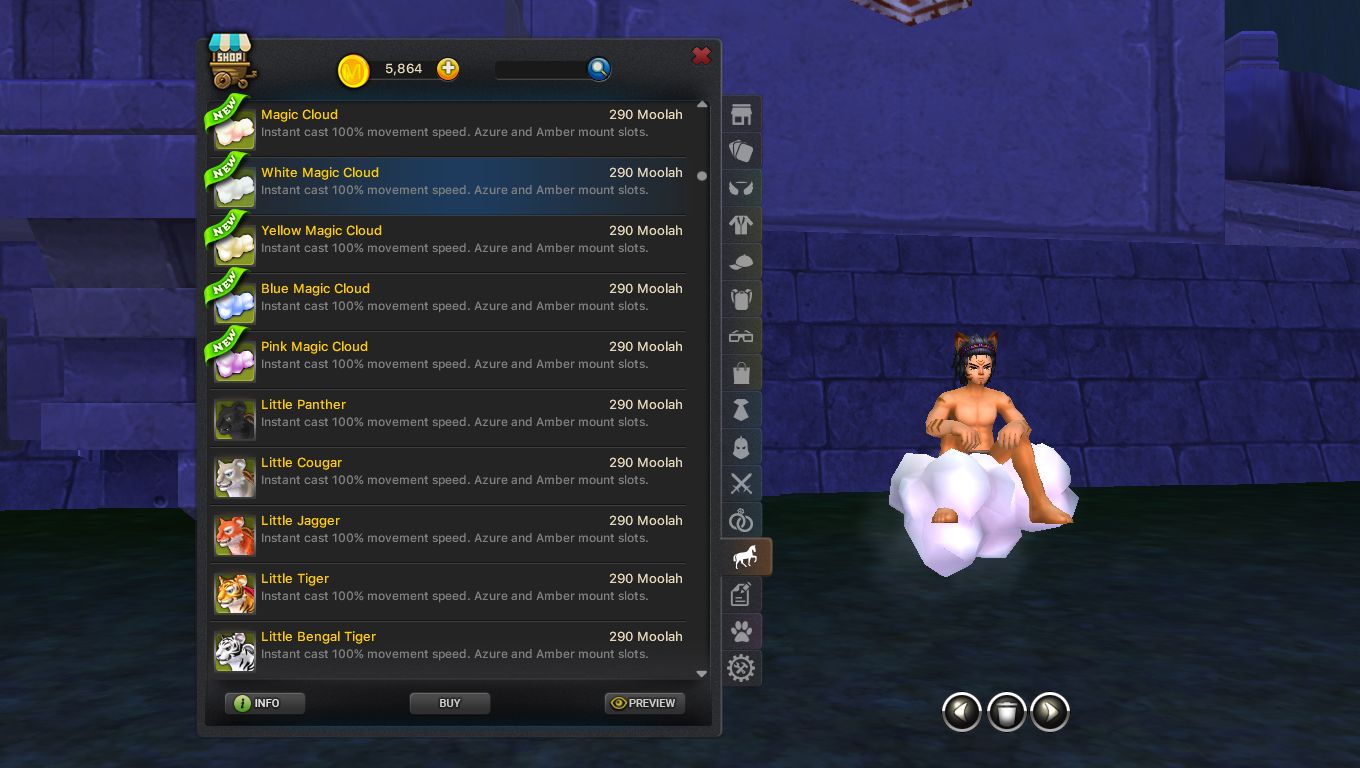 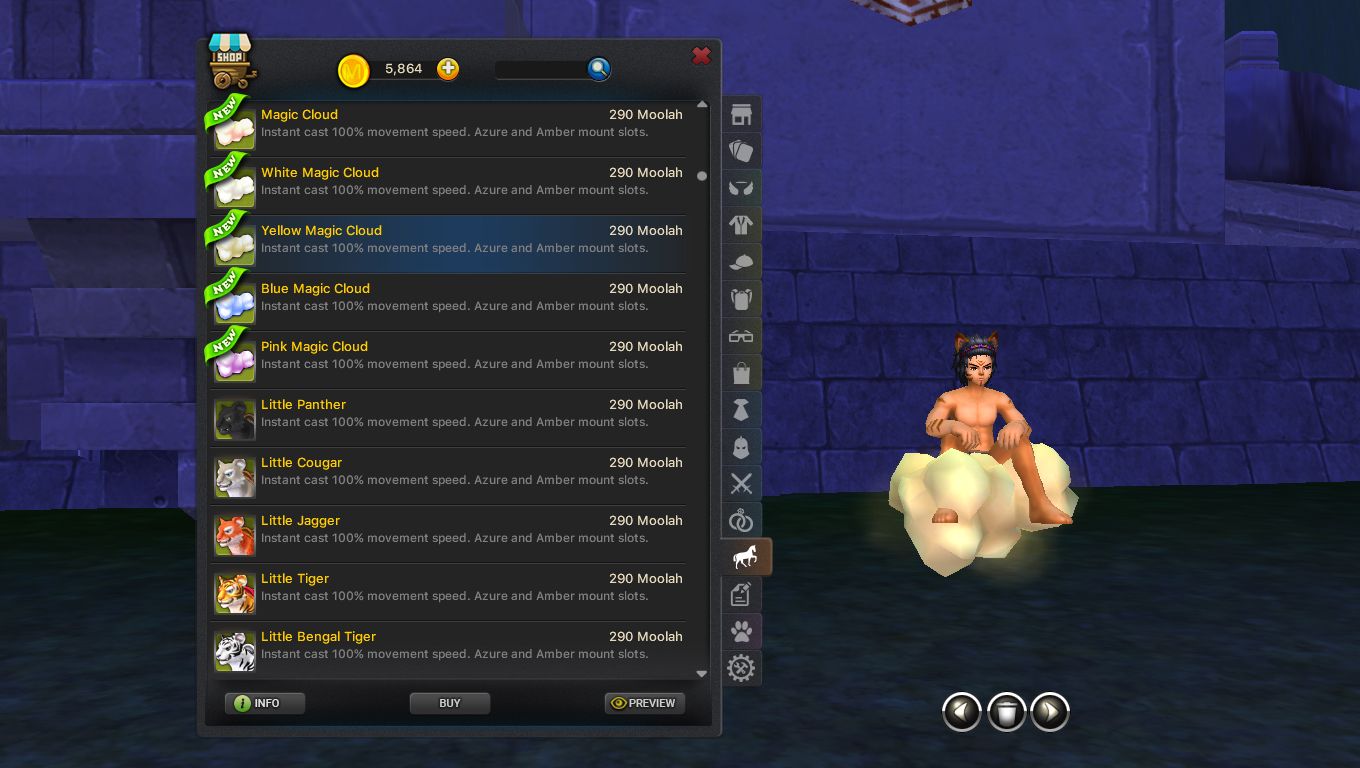 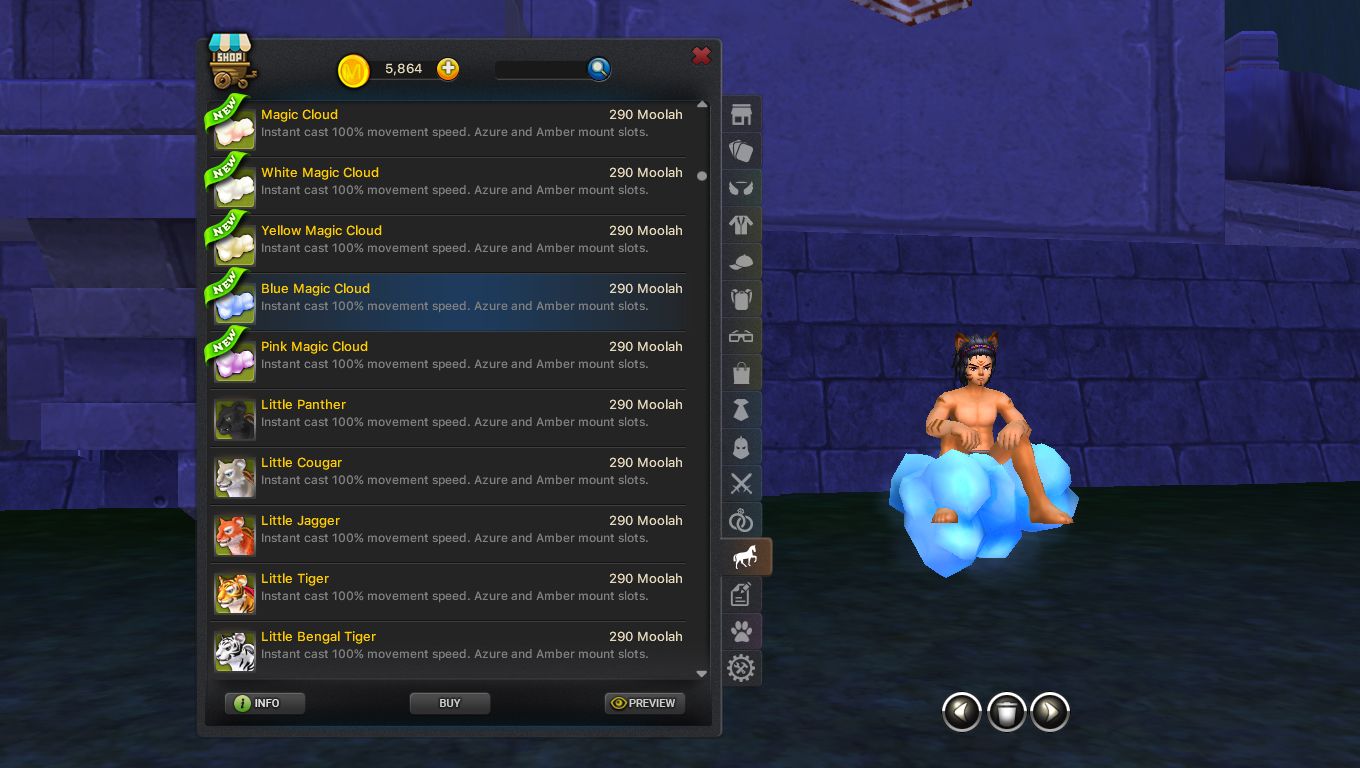 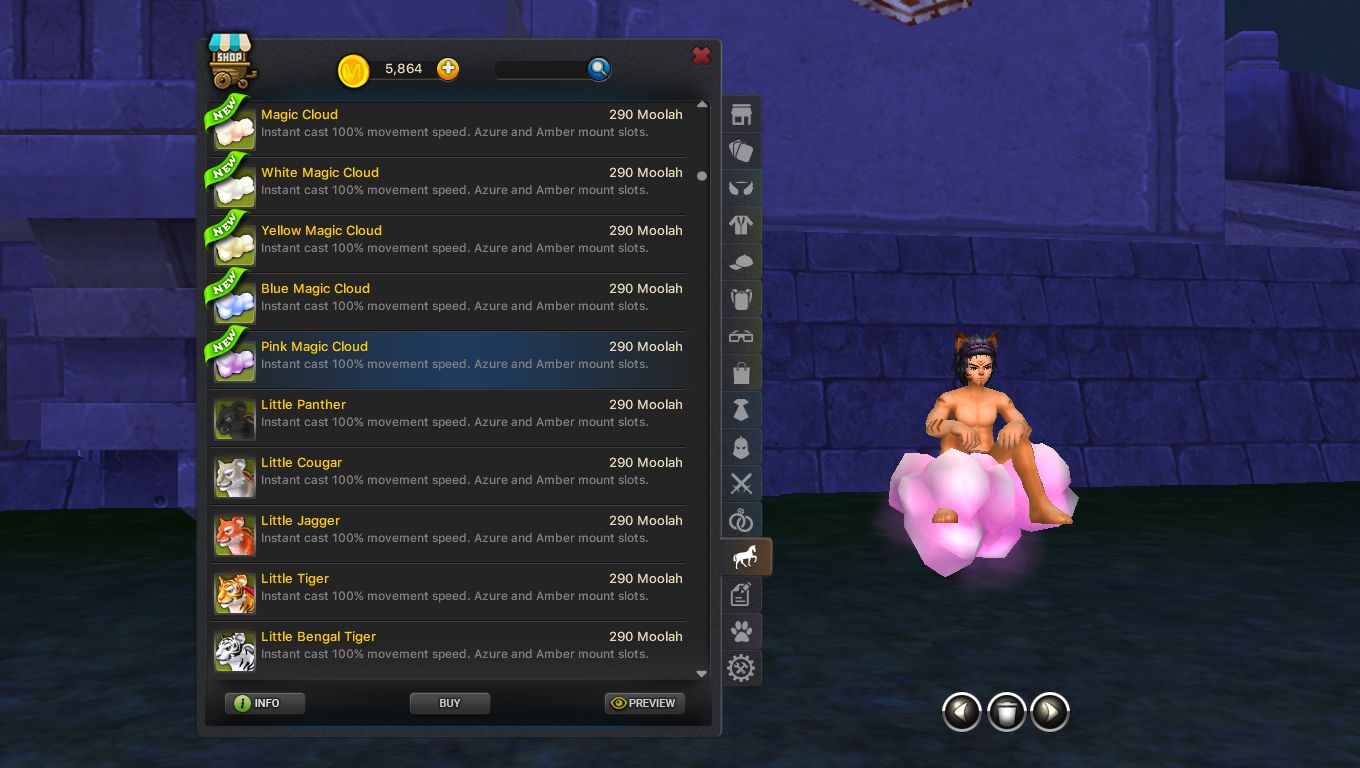 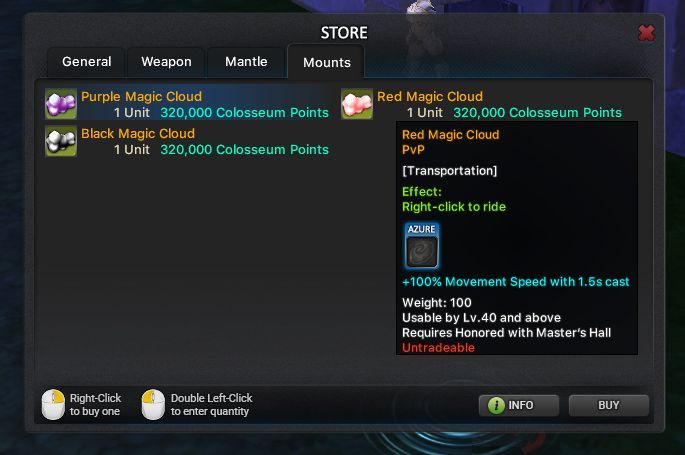 INTERFACE
Updated the game engine with a new text display system. The existing text causes massive FPS loss when there is a lot of text displayed on screen, such as multiple chat boxes, the quest tracker, monster and player nameplates etc. etc., especially if you have Font Outline turned on in the settings.

Quest tracker, unit frames, party/raid frames, damage meter, map/minimap, gauges, tooltips, nameplates - basically anything that is onscreen while you are actually playing have been changed to use the new text system. Windows that are not usually used while in combat remain the same (Auction House, Shopping Mall, vendors, npc chat and quests etc.).

The only thing that is not using the new system is the chatbox and chat bubbles - these need to remain using the old system for the international language support (display of non ascii characters, such as Russian, Thai, Japanese etc.).

The default font has been changed. It's slightly larger and has better spacing which should make it more readable. I have tried to match the new text system as closely as possible to the default font but it is a slightly different weight. Depends on your screen really.

BUG FIXES
Fixed the bug causing the client to crash on exit if you had used the Auction House.

Corrected an issue with the Need or Greed looting system when the same item drops more than once (Cletus ticket boxes for example) causing display issues with the rolls.

Fixed an issue with the Party Finder level range inputs - they will now show the max level of the selected dungeon and mode if there is one.

Fixed a bug with the Target of Target window that might have been causing some slowdowns, even if it was disabled in settings.

Fixed a bug with the target window not shortening long monster names in some cases.

Fixed an issue with the Great Fairy mantle schematics not showing.

OTHER
Chests/boxes that contain event foods have been modified to only drop one type of HP/MP food - drop chances remain the same, it just means you won't end up with multiple different foods that do the same thing taking up your inventory slots.


Thats all. I hope you enjoy the updates!
Reply
Aleksandra likes this post.
Responses (9)
Sorry, but guests cannot view the replies here.
Your Reply

what is Physical Protection

Re: Server Down - 12/05/22
The server has been rolled back to midnight and is now back online. If you got a nice drop this m

Re: Guild Emblem
Hi @Sedy. Would You mind Helping me with this guild emblem? Please and thank you!!

Re: About Mails
Thank you so much Sedy!! I had sent a private message into your inbox.

Re: About Mails
Hello, Please give me your character name and the name of the character you sent the mails to and I