Admin Sedy
posted on Friday, October 04 2019, 04:33 PM in Updates
Hey guys, the following changes will be introduced in an update later today. I am just doing some final checks.

Update: The server will come down for maintenance and to apply these updates at 21:00 for approx. 1 hour.

BATTLEFIELD
Colosseum
The player matching system for Colosseum has changed from using the player's Hero Rating to using their Weekly Colosseum Points. Since these points reset at the end of each week everyone will start with 0 at the beginning of the week and matchups will be very random. As the week progresses, and points are gained, the matching will start to put players with similar weekly points together - just like most games with arena type systems. The higher your score, the harder your opponents become.

You are now awarded consollation Colosseum Points and Master's Hall Reputation if your opponent quits during the ready countdown, or disconnects during loading. It's the same amount you would get had the match not started due to lack of players.

Colosseum draw buff corrected - it was awarding the Lose buff instead.

Colosseum rewards have been updated. Please see the ITEMS section.

Name, level, class and guild of players in battlefields and Colosseum are now hidden on the Who's Online list.


USER INTERFACE
Map
The zone map is now in a window and movable. It's position will always default to the middle of the screen when you login - it's position if moved is not saved. 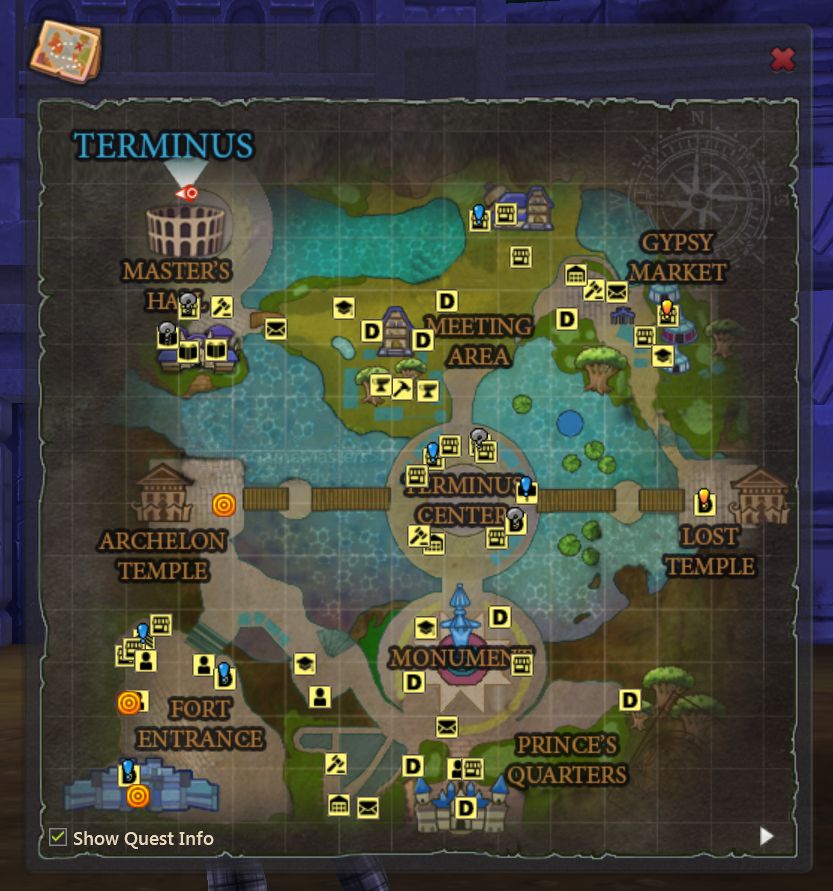 Commanding your character to move to a location on the main map by left-clicking the area with your mouse has changed to double left-clicking, the same as the minimap.

Stores
You will now be asked for confirmation when right-clicking an item in a store before purchasing it, so no more mistaken clicks 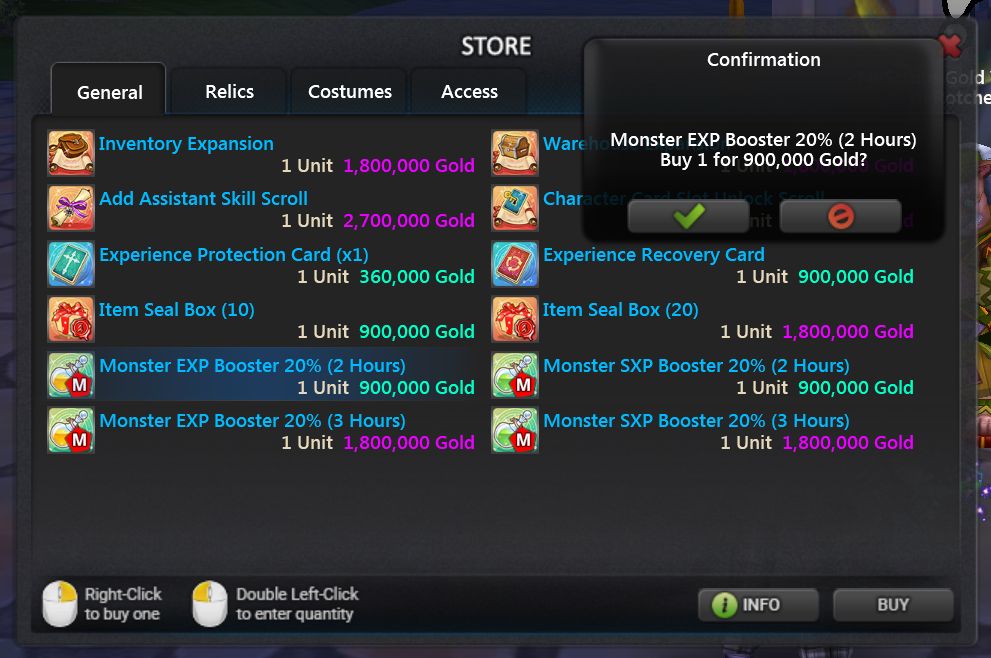 Shift + right-clicking an item remains as it was - purchases a max stack (or as many as you can afford) without any confirmation.

Added some instructional images to the bottom of the store UI to inform that a right mouse click buys one item and a double left click allows you to enter the quantity you wish to buy.


Chat
Friend logins/logouts now show in the main chat window only, not in the System filtered window.

Guild member logins/logouts now show in the main chat window only, not in the System filtered window.

Disabled the profanity filter that was accidently enabled in a previous update. The system was designed to be used for character and guild names not chat. I don't really feel it's worth adding a profanity filter to chat as it's so easily circumvented anyway, and usually ends up filtering perfectly good words as well as profanity. Like p***ion instead of passion and pea**** instead of peacock etc. etc.

When a player is killed they will now see the system message "You were defeated by ", where name is the name of the player, pet or monster that killed them.

The guild right-click menu now displays Kick from Guild in red text and the change rank entries in a lighter red colour to differentiate these commands from the others. 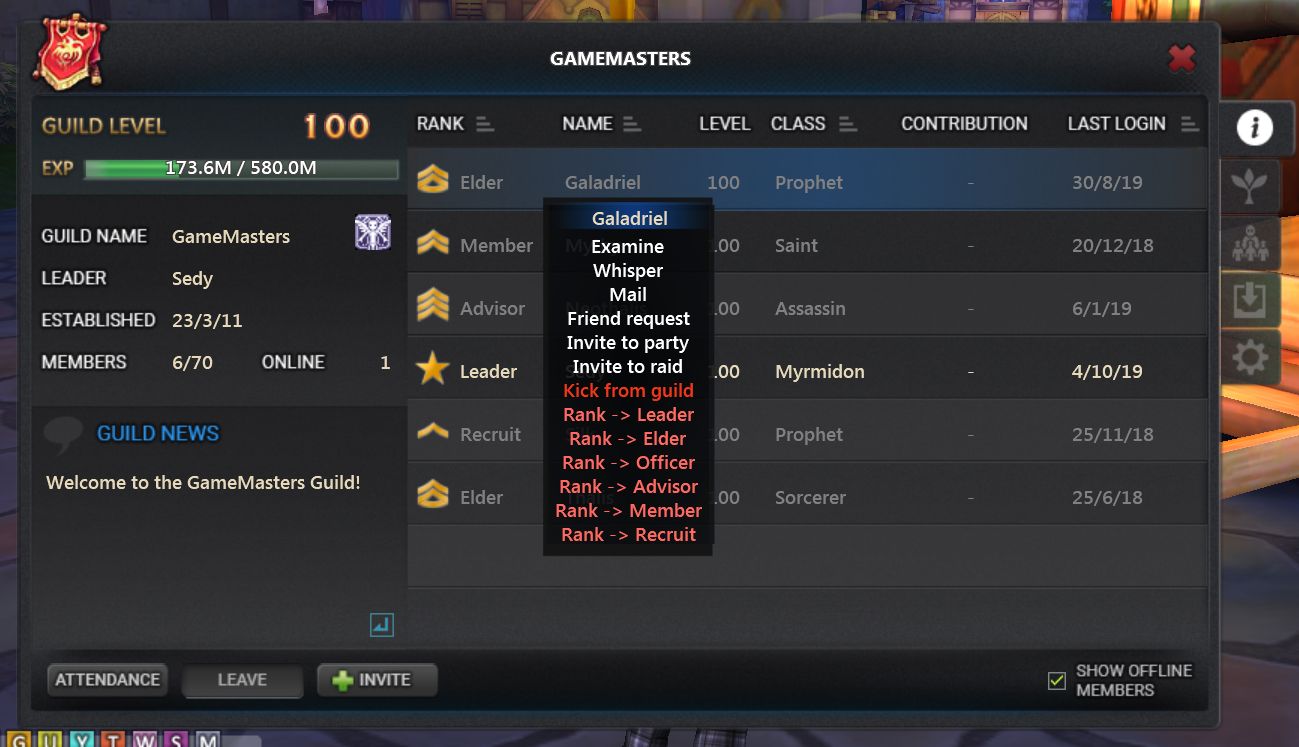 The ranking pages will no longer show Gamemaster characters.

Corrected the system message when you try to examine another player that is rejecting examines or is offline or otherwise unavailable temporarily (when moving map, entering a dungeon etc.). 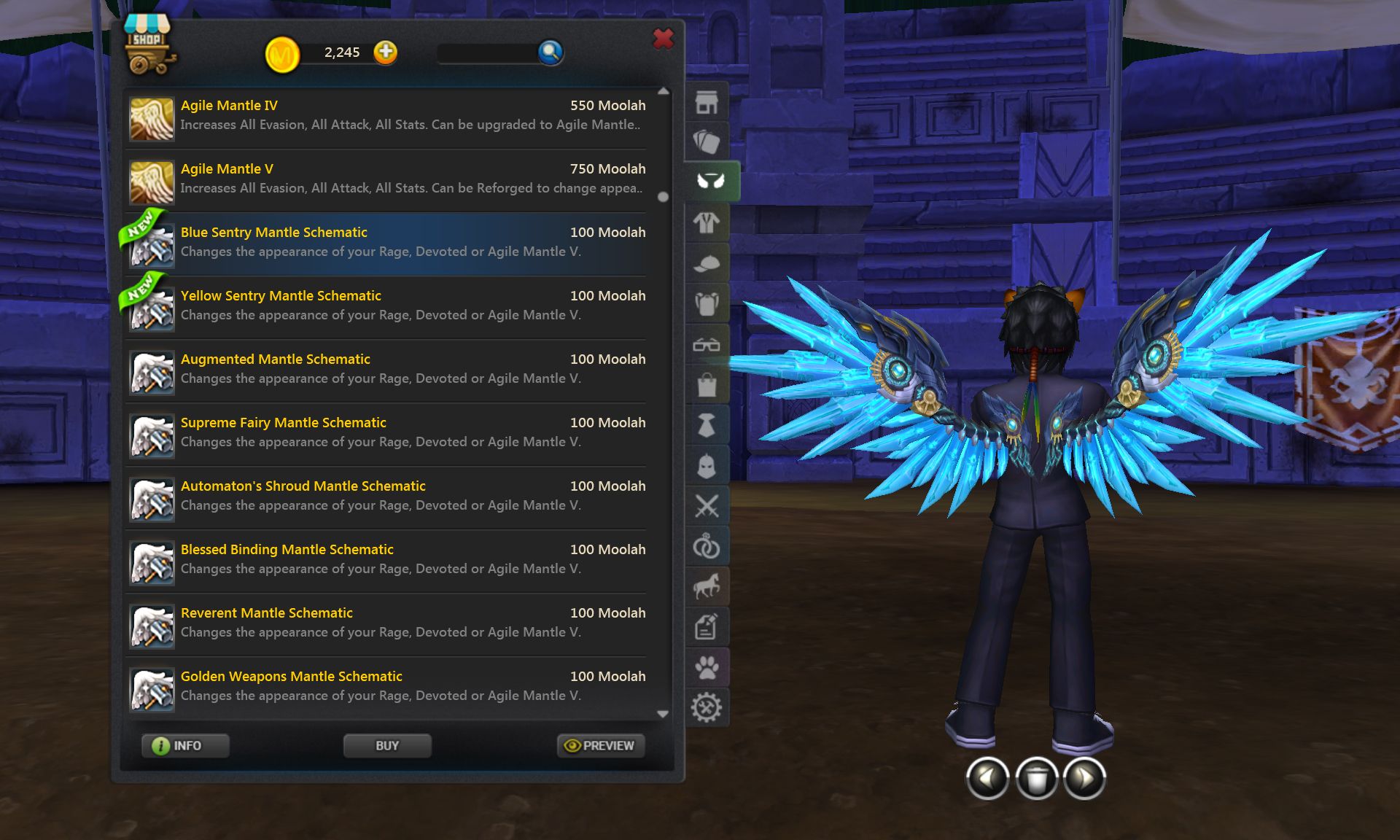 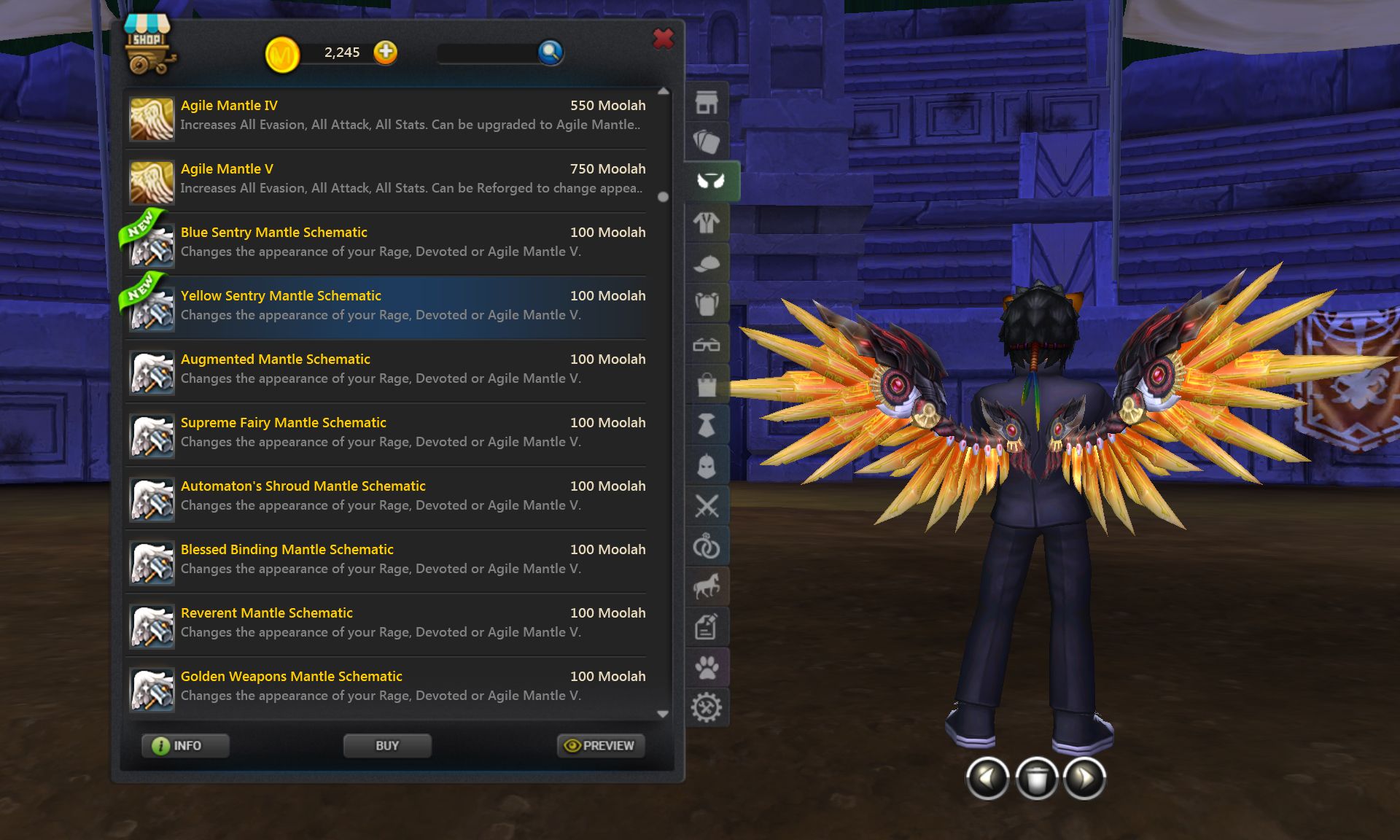 The existing Mantles obtainable from the Colosseum vendor have been adjusted:

Colosseum Aggressor's Mantle
All Defense increased to 25%, removed 5% All Protection

Colosseum Competitor's Mantle
All Defense increased to 25%, removed 5% All Protection

3 new Mantles have been added to the Colosseum vendor. These all have the same visual as the existing Colosseum mantles.

NEW: Colosseum Immovable's Mantle
All Evasion 25%, All Protection 20%, All Stats 25%

Note: These books do not require you to learn the previous ranks of the skill and are guaranteed - no fails.

Consumables
The Battlefield Dispel All Potion is no longer available to buy directly from the battlefield vendor. It may be available from some boxes with a chance, such as Colosseum Rations, and as a possible reward from Snow Mountain Hard and Hall of Elements Hard. It continues to be sold for Gold at the vendor in the Gypsy Market.

Transformation Cards
Transformation skill tooltips have been rechecked and updated as some of them had incorrect wording, skill names that didn't match the debuffs, incorrect debuff types etc. etc.


PETS
Improved the way skills (learned from books) are automatically selected and used - you should see an increase in skill use when cooldowns are ready vs auto-attacks.

Corrected a bug that was causing your pet to not use any of it's skills if one of the skills could not be used due to being out of range of the target. This was happening if you taught your ranged/caster/assist pet a melee based skill and your character had some +Range (which the pet uses). Melee based skills will now be skipped if your pet is out of range of the target and the skills range is lower than the auto-attack range. I would recommend you overwrite any melee skill you accidently taught your pet by teaching them another skill in it's place.

Improvements to pet pathing when following a moving monster that is near obstructions such as walls, buildings etc.

Increased the distance pets can be from you before they teleport back to you to 40m (was 20m).

Corrected the Typhoonus pet dispel skill to efficiency 9 - it was incorrectly set to dispel buffs with efficiency 1 only.

Increased the range of all Master pet skills from 11m to 20m in line with Heal Blessing and Magic Blessing.

Added skill cooldowns to Pet Skill Book tooltips as some skills have a reduced cooldown on higher ranks of the skill which players might not realise.


BUGS
Fixed a client crashing bug caused by monster AoE skill target circles, particularly at Namazu and some other world and dungeon bosses. It's the bug that caused so many problems at Okeanos :/

Fixed another client crashing bug that was affecting quite a few players relating to the display of damage numbers of damage over time (dots) debuffs after the owner of the dot went out of range or was no longer available (unsummoned/dead pets, disconnected players, out of range monsters/pets/players etc.).

Reworked monster AI when following a target to correct a bug with monsters keeping unreachable targets, for example when they move through a portal to another room in a dungeon.

Fixed a bug with Reflect Shield skills sometimes healing the attacker instead of damaging them when receiving very high damage.

The Attack Speed of monsters in Hell Mode dungeons has been reduced.

Damage Reflect has been capped at 80%, the same as Damage Absorb.

Almost all buffs that grant immunity to direct damage now have the same visual effect.

Added the spikey-shield visual effect to more skills that grant Damage Reflect that I missed in previous updates - all player (and most monster) Damage Reflect skills except for the healer auras now have this visual.

All party auras now use a small amount of MP continuously while active like the mail classes' auras.

Divine Intervention
Can now be cast on self, not just on allies.
Now costs MP instead of HP.
Rank 2 duration increased to 8s from 6s.
Visual effect changed.

Cooldown reduced to 60/30s from 120s.
Now does Bonus damage of 20/30% instead of a fixed amount.
Added bonus threat.
MP Cost reduced.
Corrected skill tooltip to show it can cause Stun, not Immobilize.

Chance effect now reduces All Absorb (was Magic Absorb) and it remains a Magic debuff.

Consecration
Changed from Magic Damage to Physical Damage.
Chance effect duration increased to 10s from 6s and it remains a Magic debuff.


Champion
Reflect skills have been toned down - they were too high and too many for today's damage, overpowering the class in PVP, and PvE in some respects.

Rotating Shield Bash 2
Now has a chance to grant 10% All Reflect, down from 20%.

Wall of Reflection
No change.

Charge 2
Corrected the tooltip to show that this skill penetrates 50% Physical Defense at rank 2, not 60%.


Vanquisher
Charge 3
Immobilize duration increased to 3s in line with Charge 2.
Corrected the tooltip to show that this skill penetrates 50% Physical Defense as it was incorrectly stating that only rank 2 of the skill penetrates 60%.

Ritual of Divinity
This skill has been removed.

Slaughter (was Celestial Slaughter)
This skill has been renamed Slaughter and two new ranks added, totalling 3 ranks, and now does Physical damage, not Magic.
It remains as a charge type skill but can only be used once every 60/50/40s.
It no longer requires Ritual of Divinity which has been removed.

With godlike strength you mercilessly execute your enemy, charging and delivering a destructive strike dealing 40/50/60% bonus damage whilst penetrating 40/50/60% defense.


Barbarian/Mercenary
Charge 2
Rank 2 now has a chance to Immobilize for 3s (was Stun for 1.5s) in line with rank 1 of the skill and all other plate melee class Charge skills.


Soul Blader
The Soul Blader could probably do with a slight rework when it comes to the Soul Blade skills, but for now the following changes have been made:

Soul Blade: Flash
Now shares cooldown activation with Final Flash/Final Flash 2 and Final Promise/Final Promise 2/Soul Blade: Promise and will overwrite it's buff if active. ie. you can only use one or the other, they will not stack.
Efficiency increased to 7/8/9 (was 6/7/8).


WindWalker
Camouflage and Vanish
Corrected a bug that allowed enemy players to see the WindWalker's Mantle visual effect when hiding.

Re: Update - 23/02/20
Ha-ha-ha and i was wondering why do we have two different anniversary items. Thanks!

Re: Anniversary Update - 22/02/20
@Chair I will see what I can do about the mounts - it's the positioning of the buff visuals right?

Re: Update - 23/02/20
Yeh I just fixed the card drops. It's our 9th anniversary but I activated last years quest too fo

Re: Update - 24/02/20
The server has been restarted to correct the Anniversary Card drops - working now.