Admin Sedy
posted on Saturday, August 06 2022, 02:13 PM in Updates
The following extensive changes, bugfixes and additions will be applied on Monday 8th August.


NEW SERVER HARDWARE & SOFTWARE
The server will receive a big upgrade with a faster CPU, RAM and drives, and newer operating system and software. I have been testing the game server on this new setup for the past 2-3 weeks so it should be a smooth transition without any issues. 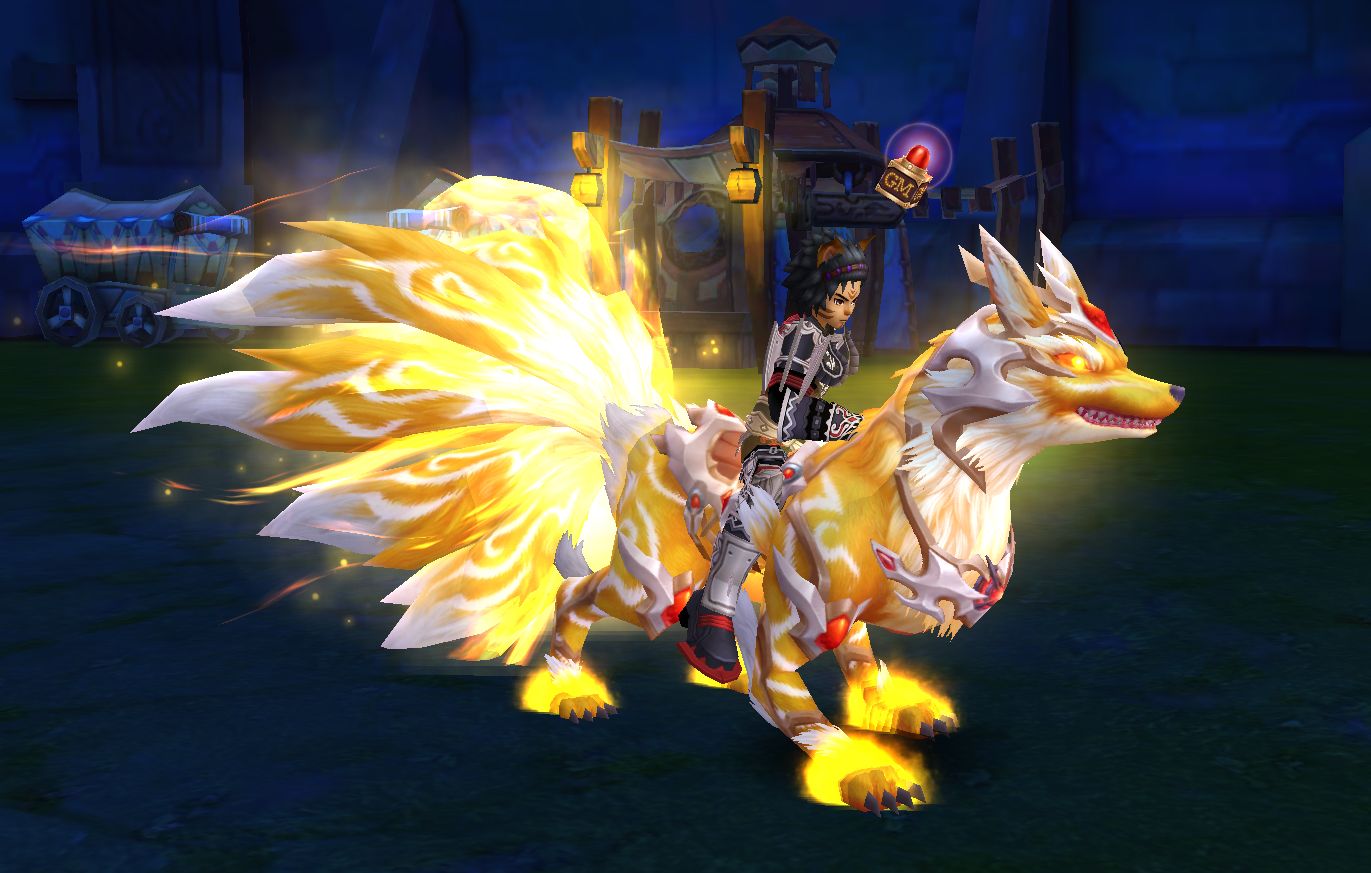 SOUND
Login & Character Select Music Bugfix
Fixed a bug with the music not playing at the login and character select screens.

Map Zone Music Bugfix
The short bursts of music when entering different zones on a map will now once again play correctly. The regular background music will fade out while they play.

NEW: Ambience Volume Control
An additional volume slider has been added to the Audiovisual tab of Game Options. This slider controls the volume of ambient sounds like the sounds of wind in the trees and birds singing etc. Previously the volume of these sounds was tied to the Music Volume slider which meant if you wanted to turn off the background music you would also lose all ambient sounds. It has been set by default to 50%. 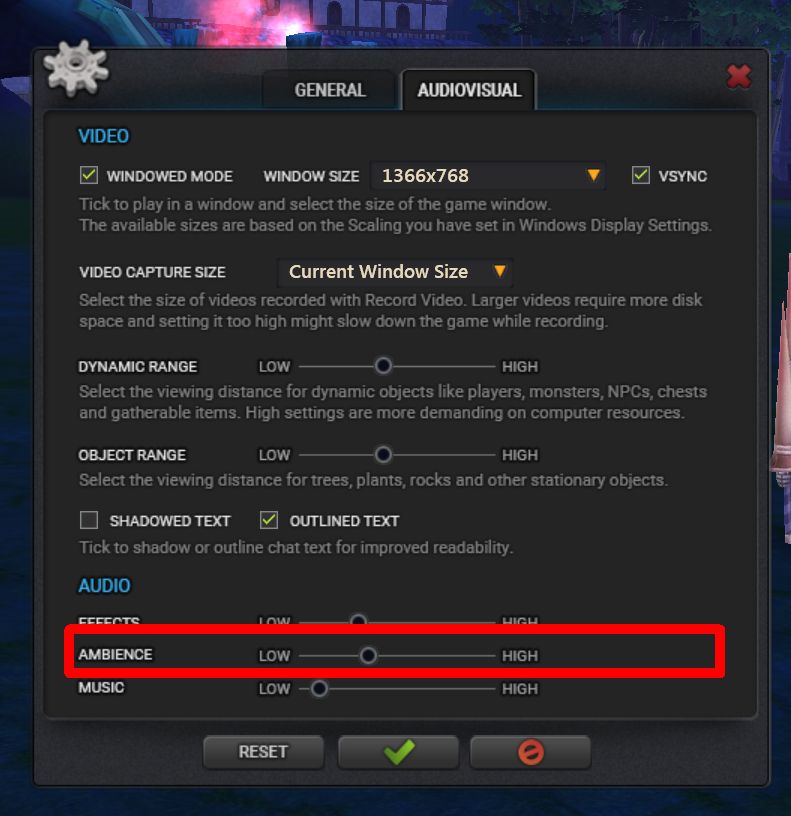 TITLES
Missing Titles Bugfix
The issue with titles sometimes going missing until you relog or move map has been fixed.

Missing Recipes Bugfix
The long-standing issue of recipes sometimes going missing from the recipe list until a relog or move map has been fixed.


DAILY GIFT
Updated Rewards
As requested, some Daily Reward items, including Medals, Trophies, and Armor and Weapon Enhancements, have been changed to items more suitable for all levels of player.


INTERFACE
NEW: Achievements Ranking
You can now view the new player Achievements leaderboard in the Ranking window. The ranking is based on achievement points.

NEW: Nearby Players
A new Nearby Players tab has been added to the Friends window. This tab will display a list of players that are on the same map as you. You can select a player and send a friend request, whisper them, invite them to a party, and mail them. 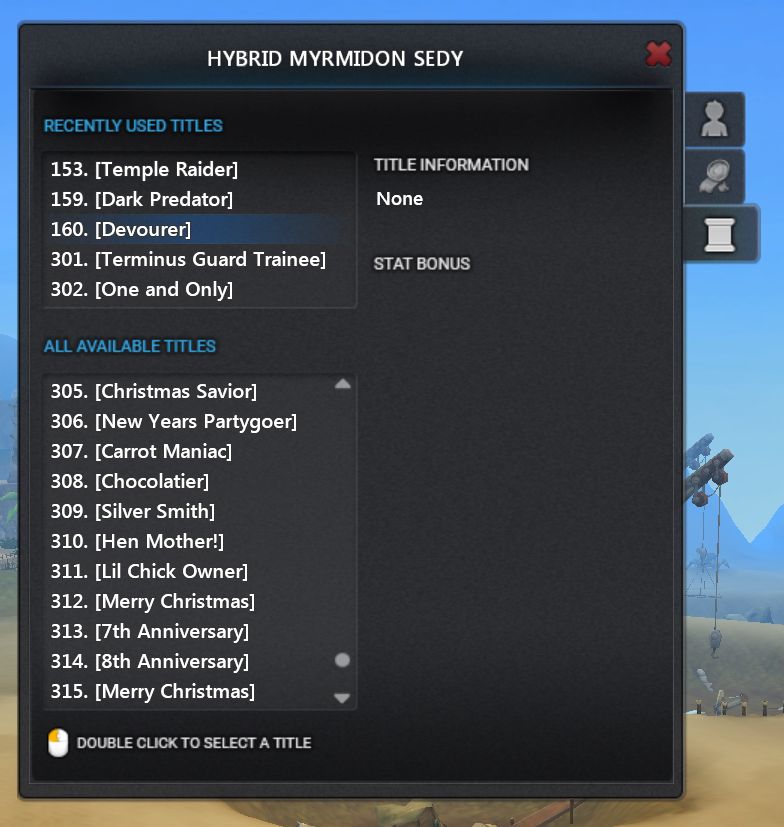 Player Skill Tooltips
The additional bonus threat that is built into tanking class skills is now displayed in the skill tooltips.

Pet Skill Tooltips
The pet skill tooltips are now generated automatically instead of entered manually by myself so they are now completely accurate. Most were ok but there were a few incorrect durations and amounts on some of the skills.

Debuff chance, efficiency and duration are now displayed for all pet skills, not just the autoattack skill.

Adding missing text for Hell Modes 1-5 in the mode drop down list.

Target Unit Frame / Party Frame Buffs & Debuffs Bugfix
Corrected an issue with buffs and debuffs going missing from the target and party unit frames when a player entered the map through a portal or with a scroll, or moved out of range and back again, resulting in players being unable to see which buffs/debuffs they had.

Character Select Bugfix
Corrected an issue with the hair color of your characters sometimes being incorrect at the character selection screen.

Damage Meter Bugfix
Corrected the progress bars that were missing for all but the player with the most damage done.

Revenge List Bugfix
Corrected a bug where a player was not removed from your Revenge List after defeating them under certain circumstances.


MECHANICS
Item Luck
The Item Luck stat is now displayed throughout the game as a multiplier instead of a percentage.

Seeing 20% Item Luck could seem like all drops have an additional 20% chance to drop - so if an item usually has a 30% chance, it would now have 50% chance, but this is not how it works. Item Luck is multiplicative, not additive, just like most percentage based stuff in the game, so it's 20% of the existing chance of 30%, which is 6% - bringing the total chance to 36%.

I have also added additional information to the tooltip of most items with Item Luck stating that the party member with the highest Item Luck is used to calculate drops - so you don't need to worry who is party leader or anything else.


PETS
Summon Cooldown
The cooldown for resummoning a pet that died or was dismissed, has been increased from 3s to 10s.

A message will now be displayed in the chat window if you try to summon a pet while it's on cooldown, stating it's not ready yet (previously there was no feedback), and a visual cooldown indicator will be displayed over the pet in the pet window. 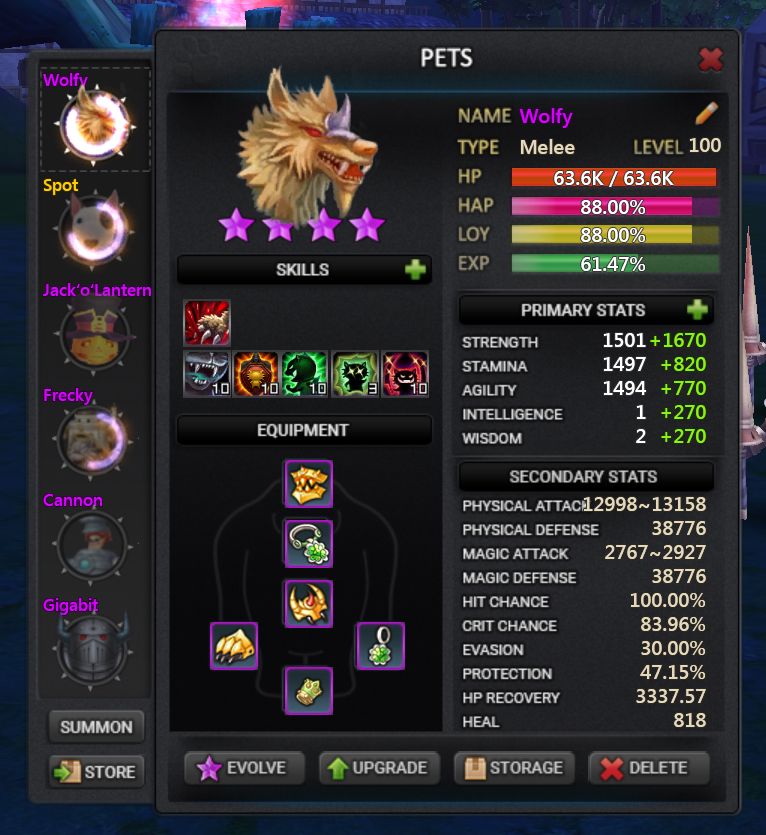 Note: Currently the pet summon quickbar buttons 1-6 have no visual cue that a pet is on cooldown but I will look into adding it.

Skill and AutoAttack Debuff Chance Bugfix
Corrected a bug with pets so that their skill and autoattack debuff chance is affected by the pet's level vs. the target's level, as it is with player and monster debuffs. Attacking a lower level target increases the chance and attacking a higher level reduces it (no change if pet and target are the same level).

Pet debuff chance is now also affected by the pet's Happiness, just like pet damage that gets reduced if the pet is unhappy.

You can now see the pet skill debuff chance in the skill tooltip and it will be adjusted based on the pet's Happiness.

Your pet will inform you when it needs Food or Water and new messages have been added depending on the urgency so look out for "I'm kinda hungry/thirsty", "I'm really hungry/thirsty", and especially "I'm starving/parched".

You will also be notified with a system message in the chat window if your pet falls below 60% Happiness.

If your pet has 20% Happiness, all of it's debuffs will be 0% chance and fail to land.

To keep your pet doing optimal damage and debuffing you need to keep it happy by feeding it Water.


DUNGEONS
Dungeon Obstructions Bug
Finally found and fixed the issue with doors/obstructions created by bosses (Radon Hell mostly) sometimes remaining after leaving and reentering the dungeon. I am fairly confident this is now fixed but do let me know if you still experience this problem.

Dungeon Specific Buffs
Dungeon specific buffs like the stage buffs of Vortex, Snow Mountain, Hall of Elements and Garden of Baphomet, and the Magic Tank transformation in Decomus, are now removed when leaving the dungeon or logging out of the game.

Golden Temple Mumu Encounter
Mumu's Pets will now spawn at the tombs in Mumu's room instead of randomly, as was originally intended for this encounter. It was changed at a later date to have them spawn randomly near to Mumu because players were moving her out of the room. As there is a barrier blocking the room now, it has been changed back. Party members getting hit by randomly spawned Mumu's Pets should no longer be an issue unless you stand too close to the tombs.

A door/barrier will now appear when the Normal mode encounter begins, as it does in Hard mode.

Note: I am sometimes asked why the Mumu's Pet monsters hit so hard.
It's by design. They are intended to be kited, not tanked, as hinted at in the tooltip of the Mummification buff they receive, "Untankable, but very kiteable!". They should be kited, preferably by a ranged class while the rest of the party deals with the boss. A melee class could do it with high movement speed but it's a lot easier for ranged classes with area of effect skills to keep hitting them all and preventing them from trying to kill the healer.


MONSTERS
Treasure Bandits
Bandits will now appear more frequently on all maps, regardless of monster vs player level. Previously they were only spawning if you killed a certain amount of monsters of similar level to your own, but since they don't spawn in Port Plunder, it was difficult for a level 100 player to see one.

Monster Threat
A new guide post explaining how monster threat and other threat related mechanics work has been posted on the website forum here.


WORLD PVP
Karma Bugfix
Corrected an issue with positive Karma not getting reduced over time. Positive Karma will now be reduced by 1 every 60s until you reach 0 (Neutral).

Wanted/Bounty System Improvement
When a player's Karma goes below -200 they are sent to prison when defeated. This system has been improved slightly as it was not possible to know if a player was below -200 Karma or not, as a Chaotic player's name changes to red at -100 all the way to -300.

Now, when a player's Karma goes below -200, their name will turn black and they are considered Wanted. They will be informed they are now Wanted and the server will announce that the player has a bounty on their head.

The player that defeats them, while they are still Wanted (below -200 Karma) will receive the bounty reward and they will be sent to prison until they reach Neutral status.

Also, Wanted players will no longer be sent to prison if they are defeated by a monster on a field map, as it was before, BUT, some of the NPCs in Terminus will now attack Wanted players if they catch them in town.

Casters
Channeled Skill Bugfix
Fixed a long-standing bug that could sometimes cause your character to get stuck in the attack state when using cast or channeled skills, especially those that require you to have a specific buff like the Sorcerer's Eye of the Storm that requires the Cyclone buff.

Sorcerer
Acceleration
The radius of this aura has increased from 8m to 15m in line with auras of all other classes.

Saint
Mana Drain
This skill no longer causes additional threat and now requires a small amount of MP to use.


BATTLEFIELDS
Battlefield & Colosseum Schedule
Due to the new Molten Arena battlefield, the battlefield schedule has changed.

Colosseum and Fire Pit times remain as they were.
Reply
Jake likes this post.
Responses (10)
Sorry, but guests cannot view the replies here.
Your Reply

Re: Hi!
I wouldn't say it's populated, but there are a decent amount of players who play this game Not much

Re: Class Skills
i havent been on for so long, decided to hop on the site and saw this thread still unbalanced til

Re: Class Skills
I do agree with all the things stated above. Especially on the significant nerf on mages. Almost all

Re: Class Skills
I can't speak too deeply on other classes but I agree for the healer suggestion; it isn't necessaril